I’m ashamed to say that the last Crafting post I did was way back, on September 11th!

I hasten to say that this doesn’t mean that I’ve haven’t done any crochet work – it just means I’ve been so overwhelmed with health problems, that writing about anything I managed to make was just too much – plus, there was also the restraint that a lot of the things I was working on were presents, and I didn’t want the recipients seeing them all before the right time 🙂

In my last crafting post, I mentioned that I’d had the privilege of testing a pattern for a wonderful designer, Dedri Uys, who’s Blog is called: Look At What I Made (she can be found here:

She wanted people of all levels of skill to test out a cute bonnet pattern, using the Crocodile Stitch – something I’d not come across until then – and she bravely allowed me to give it a try 🙂

This is what I made: 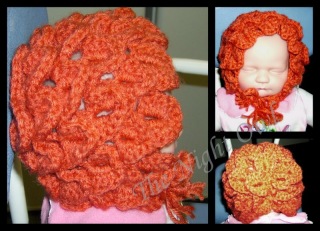 Unfortunately, the only yarn I had available, in the weight that she wanted used, was some Red Heart Super Saver, in Pumpkin, so that’s what I had to use. Now, don’t get me wrong, I actually love the colour – it’s just that, with my abysmal photographic skills, I couldn’t show exactly how lovely the colour really is – but you can definitely see the crocodile stitches! I’m quite fond of this little bonnet, as it was my very first item made with the crocodile stitch, and there had been quite an amount of frogging involved before I caught the knack of using it 🙂

I think that’s one of the main aspects of crochet work that I love most – there’s such an infinite variety of ways it can be brought together to make so many things, that I’ll never get bored with it 🙂

(https://www.facebook.com/pages/Crochet-Dans-Lair-and-The-Grey-Lady/131901040286310).
Candace had asked me to test out a pattern, which involved using another new stitch for me, the Half Double Knit Stitch – which is actually a crochet stitch, and can be found here:
http://www.youtube.com/watch?v=_pG8YuAfQfU.
Candi’s pattern was for a Laptop case and, as it happened, I had need of one, so I was happy to attempt yet another new stitch, and have something useful at the end of it – and here’s the result:

Because I didn’t have the appropriate yarn to use, and was already waiting on an order of my favourite Red Heart Yarns, sent from the USA, I made it up to the thickness needed, using three strands of DK yarn I had in my yarn stash – a dark purple, a lavender, and a white. I used 2 buttons from my button stash as a closure, and I’m very pleased with the result – as was Candi, thank heavens 🙂

Since then, I’ve made quite a few items – including some bunting in various leaf patterns for a friend’s craft stall – which I forgot to take a pic of! But I’m hoping that she will take one of it in use and, if so, I’ll show you on another post 🙂

I’ve been quite busy making winter outfits (hats, scarves and gloves), for my parents, as it’s their 58th wedding anniversary on 27th December and, as they both use scooters to get around now, I figured they’d keep a little warmer with some snuggly winter wear 🙂

I was given some gorgeous cream-coloured Aran Yarn, flecked with tiny spots of green and brown, which was, unfortunately for me, 25% real wool, and so was a total trial to use – but I was determined to make a really warm set for my Dad,

and so I made him a lovely warm Hat, a scarf to match, and some Glittens – or fingerless mittens – that I’d got as a Premium pattern from Crochet Spot, which can be found here:
http://www.crochetspot.com/store/index.php?pattern=99
– I managed it in the end, after having very frequent breaks to ease my hands (it’s a pain figuratively, as well as physically, to be allergic to real wool!), to get them finished – along with a set of house slippers that I lovingly crocheted with the same yarn, too – but my Dad is well  worth the pain of using the wool-blend yarn! 🙂
For my Mum, I was very fortunate to be given a wonderful pattern called, Lady Victoria’s Winter Warmers, a set of Hat, Neckwarmer/Cowl, and a combination of fingerless gloves, with a Mitten cap, to keep fingers toasty while not using them for anything intricate 🙂

The set was designed by a lovely lady, called Sue Pendleton and, if you like these, then you should go onto Ravelry, where she has a load of free patterns to be used – you can find her patterns here:

http://www.ravelry.com/designers/sue-pendleton/patterns
My mum loves blue and green and, while I didn’t have any suitable blues, I did have just the right amount of greens available – Red Heart Super Saver Solids – in Tea Leaf, and Honeydew, and I also used a tiny amount of the Hunter Green for leaves, along with some vintage buttons I had just purchased, and so I was able to make the set for her 🙂

By the time I’d finished making the set, there was plenty of the accent colour (the Tea Leaf) left, and so I decided to make Mum an extra gift of some Leg Warmers to keep her legs snug on her scooter – and a pair of light house slippers to wear indoors 🙂

I used the Alicia Leg Warmer pattern, designed by Leah Addis, which can be found here:
http://www.ravelry.com/patterns/library/alicia-legwarmers
I followed the pattern, except that I left off the frilled edge and buttons down the length 🙂

These house slippers, minus the contrasting, frilled, edging, were from a free pattern on Jay’s Boutique Blog, to be found here:
http://www.jaysboutiqueblog.blogspot.fr/2012/05/free-pattern-womens-house-slippers.html
Two other items I made – which were posted all the way over to Canada, were a couple of amigurumi sea creatures, to be placed on display in a Crochet-arium, organised by Michael Sellick, of The Crochet Crowd fame:
(http://www.thecrochetcrowd.com).
This took place on October 13th, at the Creativ Festival in Canada, where each item was sold on behalf of Crafting for A Cure, a charity project, which also covers North America. I don’t know what my two sea creatures went for, but I just hope that they helped a child somewhere 🙂
I made a Narwhal, and an Octopus – unfortunately, I can’t find the photos I took of the Octopus, but there’s a nice photo here (even if Mikey did get the place I lived wrong – it’s Wales, Mikey, not England! Lol), along with my Narwhal:
http://www.flickr.com/photos/mikeyssmail/9836843594/in/set-72157635299722849/
I did make a collage pic of the Narwhal, so here it is: 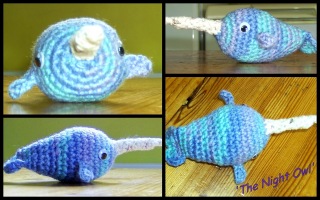 I’ve made quite a few other bits and pieces but, until they are given to their recipients, I can’t show them on here, in case they see them before time 🙂

I do hope this has made up for my silence for so long? 🙂