Due to being tired, I posted the following post in my other Blog a few days ago, and only realised what I’d done earlier on. If you’re interested, here’s a link to my other Blog, where you can see the original post:
https://katythenightowl.wordpress.com/2014/06/07/being-creative/

As I wanted to keep all the records of my crafting together though, I decided to re-post the original post here, too – I hope you find it interesting – and the links a handy step to creating something yourselves? 🙂

Despite having a really bad time, health-wise, this last month or so, I’ve also had plenty of odd moments, where I’ve been too bad to do much, but not bad enough to do nothing, and so I decided to use whatever time I had free to take care of various crochet projects I’ve been working on.
It actually amazed me how much I could get through, doing it in dribs and drabs, but I’m quite pleased with the results of my labour 🙂
The first things I had to finish off were a set of 6 fancy dress costumes, made for a little baby boy I know and love. He is going to be having his first experience of Glastonbury this summer, and his mum, who is one of my daughter’s oldest, and dearest, friends, had been telling me that there would be fancy dress competitions for the little ones. This decided me and, after talking about what she’d like, I started to make the costumes!
Now, very much unlike me, once I’d finished making the outfits, I’d forgotten to take any pics of each of them, so baby boy’s mum has promised me that she’ll take pics of him as he wears them – and, as it happens, she posted the first picture she took, of him wearing his Cat-in-the-hat outfit, for me. Unfortunately, he wasn’t wearing it properly, but I still think he looks as cute as anything in it – and the hat fits beautifully! Lol

Just as I’d finished the outfits, a friend called in, and noticed a pile of items I was preparing to send to my daughter, and one of the items caught his eye – a cowl I’d made for her, using Red Heart Super Saver yarn, in the Tealeaf colour, and with highlights of the Peacock Shimmer yarn.
He asked if I could make one for him, as a present for his sister-in-law, and so I agreed. Unfortunately, I didn’t have enough of the Red Heart Tealeaf, but I did have some Robin’s Chunky yarn, in Pistachio that he really liked, and so I used that.
While I was making it, I realised I had enough of this yarn to make a hat and fingerless gloves to match, and so, using the same popcorn stitch pattern, which can be found right here:
http://calleighsclips.blogspot.co.uk/2012/11/candy-stripes-hooded-cowl-free-pattern.html
I went ahead and made the cowl, and then used the same popcorn stitch to complete the set for her 🙂 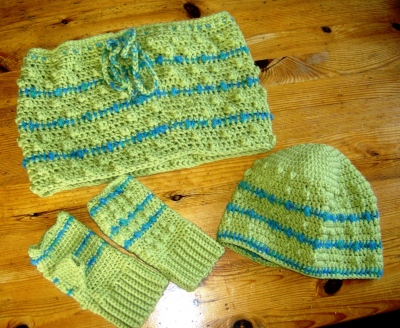 During our conversation, he also asked me if I could crochet a teapot cosy, in the shape of a chicken – well, I’m always eager to give things a go, and so I accepted his commission, and we added some other stuff to make a kitchen set up, all with the theme of chickens – but they had to be black ones, as these were, apparently, her favourites! Lol
Here’s what I came up with:

I bought a pattern for this, from Etsy, the link is:
https://www.etsy.com/uk/shop/Millionbells?section_id=14018297&ref=shopsection_leftnav_4
I then adapted a pattern for a set of 4 egg cosies to match, from a free pattern, called the ‘Eggstremely Cosy Set’ designed by ‘funkynitter’ on Ravelry (here’s her link:
http://www.ravelry.com/projects/Funkynitter/eggstremely-cosy-set).
The free pattern was made by the clever blogger ‘The Very Savvy Snail’, at:
http://piecesofmylife-victoriag.blogspot.co.uk/2009/04/well-after-having-spent-morning-trying.html

I decided that I might as well have some cup coasters, too, and came across a free pattern that looked ideal for my purpose – you can find it here:
http://web.archive.org/web/20060425232136/http://irenecrafts.com/patterns/chicken_coaster.htm

And then I thought, ‘why stop there?’, and so added a Chicken hot pad to finish the set. I had a pdf pattern for one of these – it was one of the free Annie’s Crafts ones, though, on looking for it on the site, I couldn’t find it, so I can only assume I got the pdf pattern from somebody else’s blog – but I can’t remember who, and I didn’t save the link, unusually for me 😦

This pattern was called the Chicken Hot Pad & Chicken Shelf Set, and so I decided to crochet the cute little amigurumi shelf chicken, too:

Our friend was really pleased with what I had made, and, as he just loves hats, and loved the pistachio yarn, I used the last of it to make him a hat to wear this coming winter, with a little of the Tealeaf yarn I had in my scrap yarn box as an accent colour:

Next to make on my list, was a Peppa Pig toy for that gorgeous little man I’d made the fancy dress outfits for. Now, I hadn’t a clue who Peppa Pig was, until I searched online, but, as it was his favourite TV character, I decided to have a go. As I’m not clever enough, as yet, to make up my own pattern, I decided to have a look at what was available, and I came across this one, by Samarara, on Ravelry:
http://www.ravelry.com/patterns/library/peppa-pig-amigurumi

Little man really laughed when he saw her, and immediately stuffed her into his mouth (he’s teething, poor chap!), but his mum says he’s delighted with his new friend, so that’s made me very happy 🙂
My next project to complete was a Rainbow Project Bag. I’d seen the link to this on a friend’s Blog and, as I was familiar with Lucy, from ‘Attic24′, I thought I’d have a go. I really loved the look of the bag and so I decided to make it specifically out of some of my scrap yarn, to use for my WIP’s.
I finished it yesterday, and I’m delighted with its capacity, and the friendliness of its bright and breezy colours, and I’ve already filled it with the yarn I need for my next project – well the next, next one, anyway – I might even make another one, too!
Here’s the link to the blog page:
http://attic24.typepad.com/weblog/jolly-chunky-bag.html 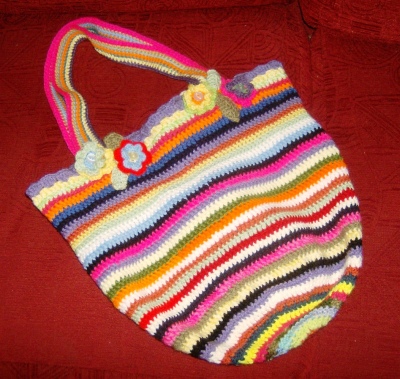 Right now, I’ve made a start on a Lacy Market Bag pattern that’s the June challenge for The Crochet Crowd. I must admit, it’s a new stitch for me, and I’m finding it challenging but, between that, and starting on my main Crochet By Numbers project, I’m pretty sure that the rest of this month is now spoken for – unless I have a few minutes free to make some small items, anyway! Lol