Yes, I know, it’s been a couple of weeks since I posted about my crocheting, again, and I did promise to continue to show the things I created over that very large gap when I hadn’t blogged anything, so here goes . . .

The last thing I showed you, in April, was My Captain Jack doll that I’d made as a mascot for my piratey daughter, in March 2015 – but the next thing I made her, also in March, was a toiletry set made of cotton Lily ‘n Cream, which I had in my stash – a gift from a friend ‘over the Pond’ 🙂

I really do love this yarn, and I’d been saving it for something special, so I figured my daughter was definitely special enough to recieve it 🙂

My daughter works at the various festivals that happen around the UK (and Europe) all through the year [she belongs to various groups, a couple of which are called ‘Slamboree’ & ‘The Gutterstars Collective’. She also does her own thing, with both fire, and stilts, too, so I figured she could do with something hard-wearing, and re-usable, considering the bashing they’d have to take 🙂

I also wanted to make her something with the ethos of saving the planet – in my own small way – too, as the huge amount of wipes she tended to go through weren’t exactly friendly to the earth – and this lovely yarn seemed perfect for that 🙂

I had one Lime Green, and one Blue of this gorgeous yarn, so I decided to mix the two, to create a set out of two seperate patterns I’d chosen to make.

The Bath (or shower) Pouf, is a pattern I found on Ravelry:
Puffy Bath Pouf by The Stitchin’ Mommy

The pattern was made using Caron Simply Soft, and we were given different colour combinations to use. As you may have gathered by now, I do love my purples, so that’s what I chose 🙂

The pattern involved making squares that were then joined together, and it made a throw-sized afghan – a lapghan really. It was quite complex, with stitches I’d never dealt with before, so I enjoyed learning new skills. Unfortunately, my photo-taking skills are abysmal, but I hope you can see some of the details 🙂

The next project I made, was an Amigurumi Snail, and I made it for a fellow Blogger who was doing a Snail-a-Day Project – here’s her Blog: Snail-a-day
The creator of the wonderful snail pattern, is one of my favourite Amigurumi designers, Moji Moji Designs. She has created some awesome patterns, and I’m very, very, slowly working my way through them – here’s the link to her Ravelry Shop – you’ll find a much more colourful version of Shelley the Snail on there:                          Moji Moji Designs 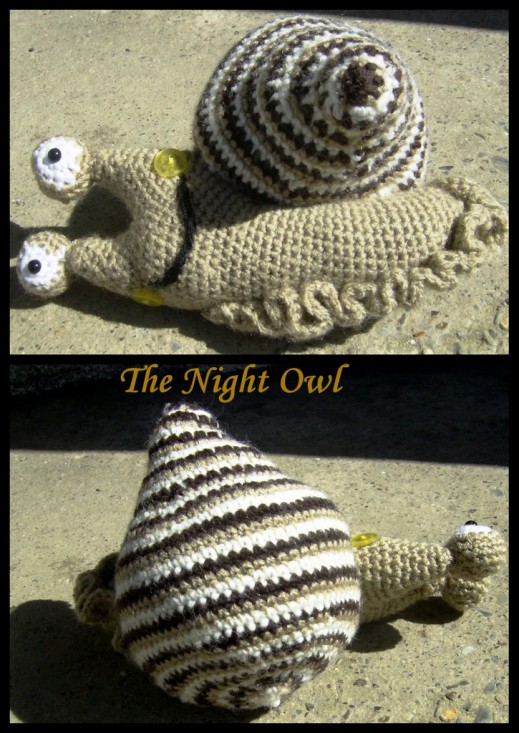 My next project was made, literally, from my scraps of yarn. In May 2015, I had come across the site of a Blogger called Creative Crochet Toys, and she had arranged a CAL to make a bag out of our yarn scraps – and as I had quite a few of these, I decided to give it a go 🙂

I’ve got the pattern stashed away on my external hard-drive somewhere, but here’s a link to Ravelry, where you can purchase the pattern for yourselves: Scrapalicious Bag by Creative Crochet Toys.

I kept the bag for some time, as it was quire roomy, and very handy for WIP’s, but I made a gift in the new year for a dear neighbour, and put the gift in this bag, as she’s remarked on it every time she saw it – I figured two gifts in one, is much better than just one gift 🙂

I’m actually building up quite a stash of scrap yarn again, so I might dig out my pattern, and make another one some time this year 🙂

The next thing I made, in June 2015, was actually something for myself for a change! Lol

Being so ill all the time, I tend to feel the cold, even when everyone else is sweating in the heat so, when I came across the pattern for a shrug that would keep my shoulders and arm tops warm, I looked at my stash yarn, and found a pretty pale lilac DK yarn (sorry can’t remember the name), and went ahead and made it. Now, I’ve got a ton of shrug patterns, and I’ve looked through them all, but can’t find this particular pattern, unfortunately, so I can’t post a link for you 😦

But, shortly after I finished my shrug, I had a hospital appointment, and I bumped into a friend, with her daughter. During our conversation, her daughter was saying how much she loved pink – and I remembered I had a whole load of fuschia-pink shimmering yarn that my Mum had sent to me months before. I had a word with my friend, asking if she’d mind me making a shrug for her daughter, and she was delighted, and promised to send me her daughter’s measurements a.s.a.p! 🙂

Once I got home, and had recovered from my trip to the hospital, I went onto my laptop, to see what patterns I could find to use for her. I came across two that I really liked, one on Craftsy: Easy Breezy Shrug by Joyful Yarns Crochet , then the second pattern: Scarlett Shrug by Moogly 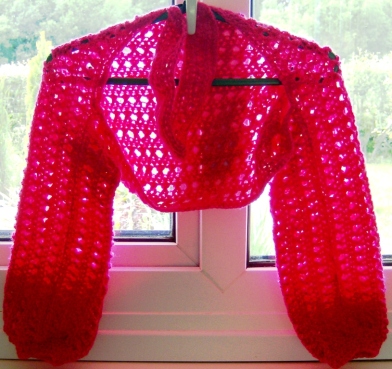 Unfortunately, my health got really bad again, and so I couldn’t do anything – let alone crochet, for a couple of months after that 😦

I’ll tell you what I did after I recovered somewhat, on my next post 🙂