Like the whirlwind we often refer her to, our daughter has been, and gone, in a seeming flash!

We knew it was only going to be for a couple of days, but they flew past far too quickly for our liking – but at least we know she’ll be here with us in early October, as she’ll be coming for at least a week, for our 30th wedding anniversary 🙂

By then, she’ll have had all her yearly festivals out of the way, and we’ll be able to spend some really quality time with her, catching up on all her doings and, no doubt, looking through the many photos she loves to take of anything, and everything, to do with her life as a Stilt-Walking Pyrotechnic 🙂

In late August, she’ll be travelling to the USA, where she’ll be taking part in The Burning Man Festival, in Nevada, where she’ll be joining in with yet another great performance, created by The UK Fireworks Collective. Her visit last year was a fantastic start to her professional life as a performer and, having seen the practice video of this year’s performance, it’s going to be even better than last year 🙂

I mentioned in my last post that I’d created a mascot for her and, thankfully, she absolutely loved it! I crocheted her a Lion, and dressed him in a fancy vest, and legwarmers, with Brex’s name, and the name of her new company, The Gutter Stars Collective, on the vest.

It had actually taken me 3 weeks to complete the Lion, only finishing it mere minutes before Brex arrived on her visit. The actual body only took me around 4 days to crochet, stuff, and assemble, but the rest of the time was taken up with creating his fur – If I ever want to take up rag-rugging, I think I made a good start with this! 🙂

Brex took a few pics of her new friend (she hasn’t decided on a name yet – she reckons she’ll know what it is by the time she’s finished her next gig!), so here he is in all his glory: 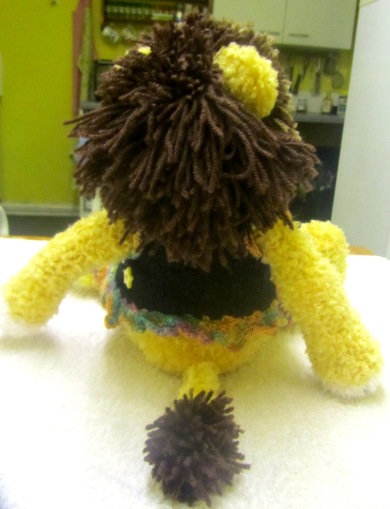