A Few More of My Crocheted Pieces

It’s been a while since I posted about my crochet, probably because I’ve been so busy either trying to finish Crochet-a-longs, or CALs as they’re known as in the crochet world, and also because I’ve been desperately trying to learn what I could about British Politics – I’m not sure whether to laugh, or cry, that I’ve become involved right at this time, but I’m going to persevere, which means doing an awful lot of reading!

Fortunately, there are some wonderful Bloggers around, that lay out what’s happening, and what it means for us all, so I’m now slowly begining to understand where the UK stands politically – and, boy, it’s frighteneing!

Anyhoo, I thought I’d get away from that for one evening, and continue showing you all the things I’ve been crocheting over the last year or so – I believe my last post about it was on May 3rd – here’s a link: A Few More of My Offerings

The last project I showed you was  two shrugs I’d made for the daughter of a friend but, after that, I went through another awful patch of ill health, and so couldn’t do any crocheting 😦

The next project I finished, was a Wrap, designed by a wonderful crochet designer called Annelies Baes. You can get the pattern free at this link: Flight of Fancy.

The CAL was called Scheepjes Flight of Fancy Wrap, and it was done in weekly increments. I started the project on 10th June, and finished it on 1st September.

I was really taken with the wonderful yarn used here, by a company called Scheepjeswol . With this CAL, I was using one of their yarns, called Scheepjes Linen Soft , which comprised of 47% Cotton, 27% Linen, and 26% Acrylic, which made for a strong, and durable, yarn to use.

Here’s the Project page I created on Ravelry, which gives you the details: My Flights of Fancy Wrap The colours used were gorgeous, and reminded me of peacock feather, which I love 🙂

Here’s my finished project, which I gifted to a dear friend: 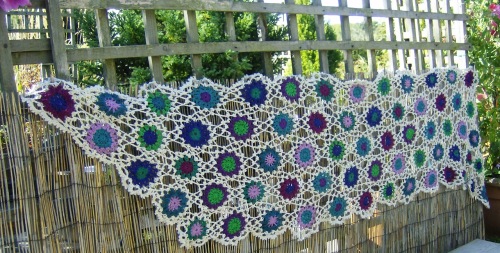 The next project I made, was finished on 19th September, and was something that I made for my daughter to give to a friend. Her friend loved kooky presents, especially if they had something to do with the body, so I crocheted her two seperately coloured, and sized, eyes – including the optic nerves, too 🙂

I had come across the pattern by chance, at this link: Crocheted Eyeball by crochetninja, and just loved the idea of it – and making it was fun, too 🙂

I used various yarns from my stash for this, mainly acrylics, if I remember true 🙂

I’m told the recipient loved them 🙂

My next project took me a bit of time, as my health was becoming quite dicey again, and I was still working on another CAL, too.

A friend was making up a package to send over to her grandchildren, a young girl and boy, and I offered to make them something. I showed my friend some of my patterns, and she found the one she wanted among one of my favourite Amigurumi Designers – Moji Moji Design or Janine Holmes, using her real name 🙂

Janine had recently released a new design, called Katie the Caterpillar – so how could I resist? Lol

I started making the two caterpillars, and managed to finish them by October 12th, just in time for them to be shipped to their new owners in the USA 🙂 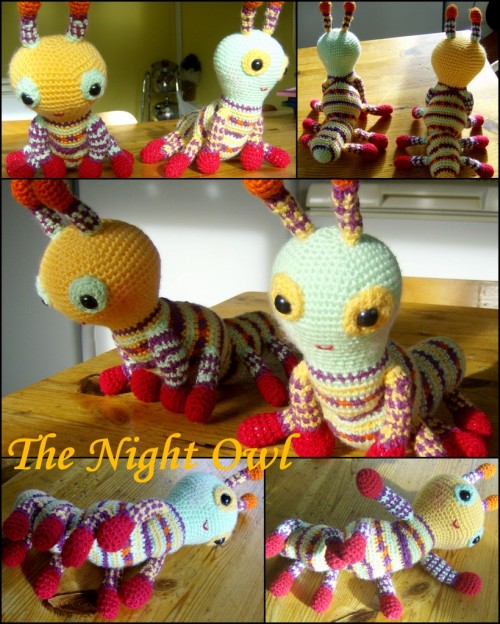 I used acrylic yarn from my stash again, and I think a lot of it was Red Heart yarn, as I had so much of it in my stash. I used the same colours in both, but just used them in opposite ways, as you can see in the pic. That way, we hoped the children wouldn’t fight over which one owned which caterpillar 🙂

My next project, was the CAL I had started on August 2nd. I didn’t actually finish this until October 31st. This was another Scheepjswol CAL, designed by another amazing Designer that I love: Julie Yeager.

The design was called: Summer Mosaic Afghan, and you can buy the pattern from Ravelry, using the link provided 🙂

This time, the yarn used was Scheepjes Stonewashed XL, a wonderfully soft, but strong, mixture of 70% Cotton, 30% Acrylic.

Here’s the link to my Ravelry Project Page, and the colours and amounts used for it: My Summer Mosaic Afghan.

This was a pattern I loved, with a yarn I fell in love with, too. I made this CAL for Mr Night Owl, and it was fun and games trying to crochet it, where, and when, he wouldn’t see it all, as I wanted it to be a surprise for him, for our wedding anniversary that year. It was a couple of weeks late, but he forgave me when he saw it 🙂 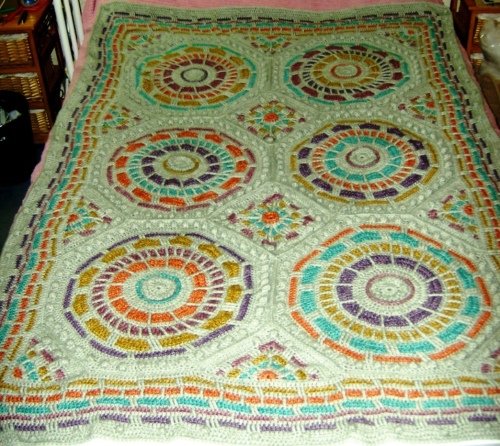 I have to admit to being totally exhausted by the time I finished the Afghan, and it wasn’t until almost mid-November before I took up my crochet hooks again, and that was because I had received my first box, from a company called Little Box of Crochet.

I’d come across them via my monthly crochet magazine, and the story behind their starting caught my attention, so I decided to subscribe for 6 months, to see whether I would enjoy it.

The first Box came with everything needed to make my first Little Box Project, and this was 3 different types of toadstools: 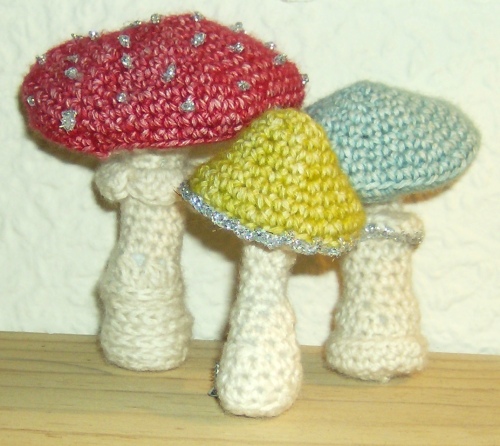 These were designed by Kate Bruning, of Greedy for Colour, and were made using Scheepjes Stonewashed, with a small amount of silver yarn to give them a christmassy feel – and enough to make them into tree decorations if I’d wanted to 🙂

My next project was one I made for fun. My husband, and a good friend of his, have a running joke about Wood Nymphs – and, no, I’m not getting into that, as it would take an entire new post of it’s own! Lol

Anyway, we had been invited over to his house for a meal and, as a joke, I decided to make him a Wood Nymph hat, and this was the result:

I had found some Red Heart Camouflage yarn in my stash, and so added some flowers and bells to it, then made it a caveat that he had to wear the hat whenever he went hunting! 🙂
I don’t know why, but he tells me he hasn’t been hunting ever since! Lol

On the 19th of November, my Dad died.

I was devastated, as I was too ill to travel the 360-odd miles needed, to get back to my family home, to attend his funeral.

I really didn’t know what to do with myself, and felt helpless that I couldn’t say my goodbyes to him, nor comfort my Mum the way I wanted to. I spoke a lot to Mum on the phone and, wonderful woman that she is, a few days after Dad’s death, she suggested that I crochet something that reminds me of him, and send it to her, so she could put it in the coffin with him, and so that I knew there was something of mine with Dad in his rest.

My first thoughts were of his being Irish, and that special humour he had, that every Irish person I’ve met seems to be born with, and so I decided to crochet symbols of his Irishness – one for me, one for Mr Night Owl, and one for our daughter.

I looked through all my thousands of patterns, and settled on a combination Shamrock/Four-leaved Clover for myself, a Leprechaun for hubby, as he’s as mischeivous as one himself, and a Pot-o-gold, with rainbow, for our daughter, as she has always been our symbol of wealth, happiness and joy.

A week had gone by this time, and I worried about getting them done in time for the funeral, but I managed to  finish them, one each day, by the 29th, where I then quickly packed them up, and a friend sent them, post-haste, to my Mum. Fortunately, they got there in time, and that’s where they lay now, keeping my Dad, that funny, chronic, joker company.

I have to admit to finding it hard to concentrate after that but, in early December my Little Box of Crochet, for that month, arrived. Purely for distraction, I decided to give it a try, and the design came from Heather Collins, whose Blog, Pink Milk, was one of the favourites of the Little Box team, and was something that caught my fancy, too, and so I thought I’d give it a go.

The pattern, this time, was for a wonderful pair of Wristers, made with Debbie Bliss’ Baby Cashmerino. As soon as I saw the pattern, I knew I had to make these for my daughter 🙂

Fortunately, we have the same size hands, so I was able to make them to fit her easily. I also made her a second pair, but this time with yarn from my stash, in Black and White, as she loves monochrome, too, but more to my own design 🙂

I finished making them on the 5th and 6th of December 🙂

I’ll tell you about the rest in another blog 🙂