Trying Some New Patterns – and Yarn!

Having had a brief hiatus between finishing my daughter’s blanket, and getting on with the gloves and legwarmers for her friend (due to having to wait for the delivery of a particular wool), I decided to have a look at my wool stash, to see what I could craft while I waited.

To my delight, I came across a plastic bag, hidden under the pile of wool my mum had sent me, and inside were 4 x 100g balls of 100% acrylic wool, from the Ice range. There were two purple, and two pink balls, all of which were self-striping.

As I’d just been going through a lot of the free patterns I’d accumulated  I decided to use one of the pink balls to make something for a baby, and I found a series of patterns for Newborns that I decided to give a try.

I must admit, considering that I’m a relative newby at this, I’m really pleased with the results, although two of the items I’ve crocheted are so small, they’re probably meant for premature babies – or even dolls!

I’ve taken some pics, as I usually do, so here they all are:

The colour of them doesn’t really show up on here as nicely as they actually are, but I think this first pic shows the variety of shades within the one ball of wool. There’s actually one item missing, as I started on it after I’d taken this one, as there was still enough wool left over from these to create something else 🙂

The cerise wool I’ve used as an edging came in with the wool mum sent me so, as it wasn’t labelled, all I know is that it, too, is 100% acrylic! Lol

This little hat, with it’s little pom-pom, ear-flaps, and braided ties, was a real delight to make and, for a first attempt, I’m very happy with it 🙂
It’s 17 cms from the pom-pom to the tip of the ear flap, and around 26 cms circumference – without stretching it. The ties are 16 cms long. 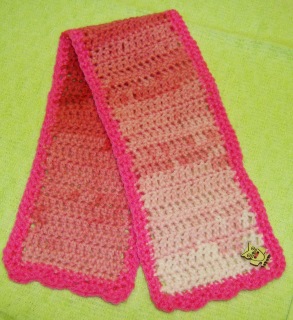 I didn’t follow a pattern with the scarf, but just used a mixture of double, half-double, and single crochet. I like it, but it did come out rather larger than the other items.
I think that, if I try this again, I’ll make it at least a third narrower than it is at present, as it’s 53 x 11 cms.

Now, I really enjoyed creating this cute little cardigan – once again, a first attempt at anything like this for me – and I was really pleased with how it turned out. The only problem, is that it turned out so small – only 16 cms long, and around 30 cms in circumference.
I used a cute pink plastic teddy button to fasten it at the collar, and I added the shell pattern to edge it, as the actual pattern was very plain. The collar wasn’t from the pattern, either.
I followed the pattern and gauge exactly from the pattern, and it should have been big enough for a newborn baby but, when a friend called in to see me, she reckons it would only fit a premature baby – or a doll 😦 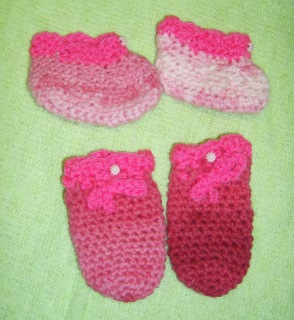 Now, these mitts and booties I thought turned out nicely, and I think I got the sizing about right with these.
The mitts are 9 x 5 cms in size, and the booties are 8 x 5.5 cms,  so I think they really would fit a newborn 🙂

Now, this little outfit, is the item I made to use up the last of the 100g ball of wool, and I really loved the idea of making a little bodysuit to match the rest but, despite following the pattern exactly, this, too, came out really small – 14 cms long, and 20 cms in circumference, un-stretched – so I guess this is another fail, like the little cardigan 😦

Because of the size problems, I’m going to send these to my mum, who dresses dolls for a charity shop. The dolls come in all shapes and sizes, so mum reckons she’ll be able to dress a few of them in what I’ve made, so I guess I’m just happy that none of it will go to waste 🙂

And it was all good practice, too, so my time wasn’t wasted, either 🙂

As the wool came this morning, I can now finish the legwarmers I’m making for my daughter’s friend, so I’m hoping to get hubby to post them for me on Friday when he goes into town.

But I’m not short of things to do, as I’ve just had an order for a neck cushion from an old family friend 🙂

I’ve made a few of these for various friends, and they’re all raving about how comfy they are, so I guess that this is something I’ll be making more of in the future . . . . . 🙂