My Brex has got many friends, but one of her oldest is Jo, who first lured Brex away from Wales, to live in Bristol – or Brizzle as Brex calls it 🙂

Jo has been going through some pretty bad times this last few years, with health problems being the worst of it, as she has a rare growth that has attached itself to her brain stem, which needs excising every few years 😦

For a life that can be pretty bleak, Jo is one of those rare people – a true optimist! She looks on life with as much positive thinking as anyone could in her situation, but she always has a smile on her face, no matter what.

She has a great fondness for pink, and is as girly as can be, with copious amounts of ‘blond moments’ thrown in to the mix, and she is an unashamed romantic 🙂

Despite all she has gone through, when she found out that she was expecting, she was totally delighted, even though it meant changing her meds to suit the growing life in her womb and, when she told us her news, she had that same positivity that she always manages to find. Like true friends, we were happy for her happiness, and are praying that everything goes well for her and baby.

Jo found out recently that she’s having a boy, and so I immediately looked through my yarn stash for the colours Jo wants, as I promised her a cot blanket for her little one 🙂

As soon as I finished making the lion for Brex, I started on the blanket. As it happens, I’m able to kill two birds with one stone, as the saying goes, as the blanket I’m making is the Juicy Fruits & Whipped Crème Throw from this summer’s challenge with The Crochet Crowd (Link Below). Mikey has so very kindly given us a choice in sizes for the pattern, and so I chose the Baby Blanket size, as it will be the right size to use as a cot blanket – and so I started crocheting 🙂

I asked Jo if she wanted a specific theme, and she told me that, apart from the colours she had chosen, if I could do something to reflect Dolphins or Unicorns she’d be a very happy lady 🙂

The colours I’ve used, I think, reflect all the bright, jewelled colours we can get in the sea, so often on a sunny day, and so I decided that, to make this even more obvious, that I’d crochet some Dolphin Appliqués  to put onto the blanket (Links Below).

While I’m doing this, I also decided that I might as well crochet a Dolphin toy for baby, as well as a Unicorn toy, using the same, or similar, colours to the blanket, thus keeping them all together as one gift.

Well, I’ve finished making the blanket, and I’ve crocheted all the Dolphin Appliqués – I’ve made 4 small, and 4 medium, ones. I looked all over the internet for a larger appliqué to put centrally on the blanket, but couldn’t find one anywhere, and so I used the Three JQ Designs pattern, and re-created a much larger version – after much frogging and restarting! 🙂

I had found all of the patterns on various free pattern sites and, although I haven’t sewn the appliqués on yet, I think they’re going to look good, especially as I used 4 of the colours from the blanket to make one each of the 2 sizes 🙂

I’ve also made a start on the Dolphin Toy – a pattern I came across recently – and, after I finish that, I’ll be making a little Boy Unicorn, to go with it all 🙂

Once I’ve finished it all, I’ll put the pics on here for you to see how I’ve done –  but here’s a pic of the blanket so far: 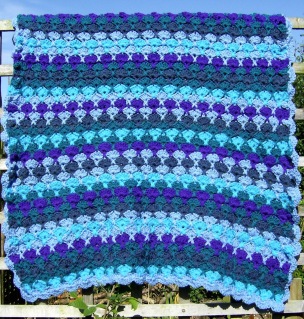