It’s been an age – again – since I blogged anything, as I’d promised to in the new year, so, as I’m actually feeling almost human today, I decided to use what energy I’ve got to make good on that promise 🙂

I had a look at the latter earlier, and couldn’t believe just how much stuff there is in there!

I’ve got nearly 50 items I’ve made since 2014 – including some large projects – and it amazed me just how much I’ve been able to do, despite my health problems getting worse.

Because of the time since I made them – and not noting down all of those impportant details for everything – I can only give you the details I can recall, so do please forgive me?

To start, I want to show you a picture of a shawl I made for a dear friend – I think the pattern I used was ‘Coraline in the Wine Country’, which I found on the Simply Collectible site, here: Wine Country Shawl-Wrap Crochet Pattern
I used Red Heart Unforgettable in Stained Glass – one of my absolute favourites 🙂
I made this in 2014, sometime in the late summer, I think, although I forgot to put a date on it 😦

The next thing I made, was still in 2014 – a little hat & Jacket set for a friend’s doll – I’d made other outfits for her in the past, so this was no problem. I don’t remember what yarn I used, as it was a remnant from my scraps, and I made the outfit without using a pattern, so I can’t help there – I wish I’d written it down as I went along, but my memory failed me again 😦
I used tiny pearl beads as the buttons on this – I think they really set it off nicely 🙂 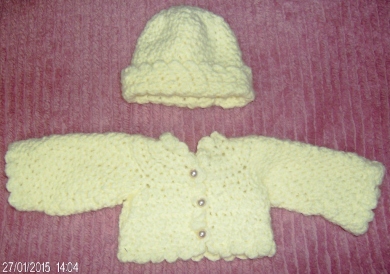 My next project, was a headband for my daughter – with her wild and long dreadlocks, she uses headbands a lot to keep her hair away from her face, and I just love making diferent ones for her 🙂
For this I used a gorgeous DK yarn, a silvery-grey shimmer yarn, though I don’t remember the make of it – and have none left to have a look at the label. For the decoration, I used a lovely button/brooch thingy I bought from eBay – I got 10 of them as, although I didn’t have a project in mind when I bought them, I knew they’d look great on something – and I was right 🙂 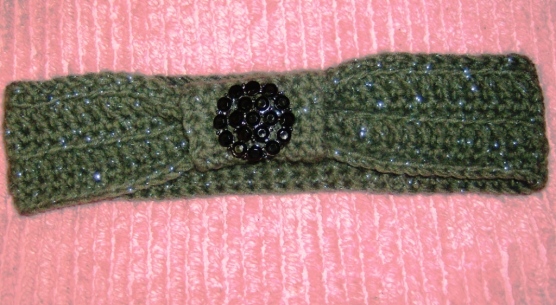 I’m not 100% sure, but I believe it was the following pattern I used: Turban Knot Headband

My next project was for my hubby. This was now November, 2014 and, being winter time, it was really cold out, and he didn’t have a really cosy jumper to wear while out fishing, so I looked among my patterns, and came across one from the Red Heart site, called the Father Pullover. I’d only tried to make a jumper for hubby once before, and that was many years ago, when we first moved to Wales. I used to knit then, and I made him a jumper with the arms slightly longer than usual – hubby has long arms – but what I’d forgotten, was that the pattern was for a drop sleeve – so the jumper turned out suitable for an Orangutan! Lol
Anyway, I had some lovely Red Heart yarn, in just the shade of green that hubby loves, so I had a go – and I was very happy with the result 🙂 Hubby still wears this, and loves how warm it keeps him. It’s also hard-wearing, and washes well (much needed after a fishing trip), so we’re both happy 🙂

The pattern can be found here: Fishing Pullover

The next thing I made was a summery chemise top for my daughter (I like to get things ready for the warmer season for her). I made a headband to match, using the same stitches as the top – unfortunately, I can’t remember the name of the pattern and, although I’ve searched high and low, haven’t found it, as yet. I hope I can find it again, as I remember enjoying making this – I think I had only recently learned how to make the popcorn stitch that was used in the pattern, and was having fun making them 🙂
I’ve got hundreds of patterns just for tops alone, so I’ve given up looking for the moment – but if I do find it again, and I remember, I’ll let you know what the pattern’s called 🙂
I also can’t remember the yarn I used – this was another DK shimmery one in a light silver colour, as you can see 🙂

At the same time of making the chemise top, I also made a circular shrug for my daughter, too. This was from a pattern by Rachel Choi, that I got from Crochet Spot while I was still a member. I adapted the pattern, as I didn’t have quite enough of that lovely shimmery yarn to make the arms, but it turned out okay, and my daughter loved it 🙂
The fastening I used was one I found in my sewing box – I think it’s a cloak fastener, but it did the trick in keeping the two edges fastened 🙂 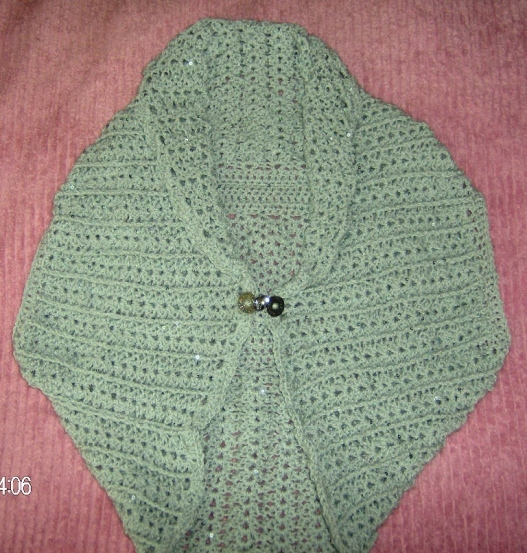 The pattern can be bought from here: Circular Shrug by Rachel Choi

The next thing I made, was a gift for a friend who loves Geckoes. I found a pattern to use on Ravelry, by a designer called Ellie Skene. Her pattern was free, and was easy for me to make, so I was very happy with it – as was my friend when she received it a little while later 🙂
There’s one thing I can see looking back on it now, and that is I’ve overfilled it, so the filling shows through the stitches 😦  I know better now 🙂 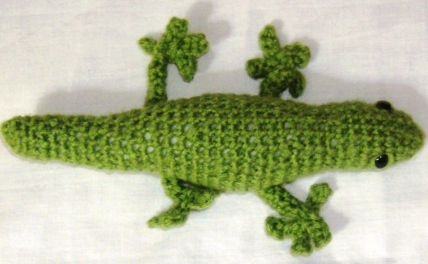 Here’s the link to the pattern: Gecko by Ellie Skene

My daughter’s boyfriend was complaining of the cold, so I then went on to make him some fingerless mitts. I used scraps from my yarn stash – probably red heart, as I’ve always got that in stock – and I used a pattern by HappyBerry to make the half-fingerless gloves he wanted.

The link to the pattern is here: Half-fingerless Gloves

This next project was, once again, for my daughter. I’d come across a wonderful pattern by Rachel Choi, on Crochet Spot, and I had a lavender DK yarn, Supersoft Baby Shimmer, that seemed perfect for the job, and just calling out to be used. I’d not made anything like this before, and was determined to give it a try. I was pleased with the result, and my daughter loved it. too 🙂

Here’s the link for the pattern: Diamond Eyelet Wrap by Rachel Choi

In March, 2015, I came across an amazing crochet pattern, that I knew I had to make for my daughter. She is pirate mad, and it was if the designer had her in mind when she made it 🙂
I got the pattern free, in an ebooklet with 10 other patterns, by Interweave. The Pattern was designed by Amy J. Shimel, and she called it Dread Pirate Sam (but, of course, it’s actually Captain Jack Sparrow by any other name!)
I had a lot of fun making this, and my daughter absolutely loves him 🙂

Well, I think that’s about enough for now – but I do promise to come back and show you some more of my projects 🙂

Hope you all have a great time with your crochet 🙂