I was interested to see this post, as I’ve recently been told that my area is going to roll out Universal Credit, and so I went onto the government website to see how I would be affected and, at the present rates, I’m going to end up being around £2,400 a year worse off – I’m really looking forward to both starving, and freezing, while also being housebound, and also unable to keep myself, or my home, clean!

Universal Credit is a disgrace, and the Tories have so much blood on their hands already, I guess they don’t care that it’s going to get very much worse for anyone who is being forced on to it 😦 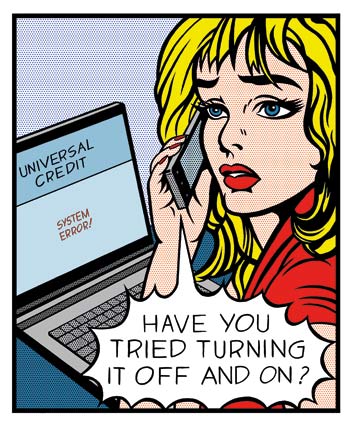 More than the usual ‘system error’.

The controversy about Universal Credit continues to develop.

Today the Currant Bun, not the Claimants’ chum,  headlines

Universal Credit revolt by THIRTY Tory MPs as they urge Chancellor to plug £2bn black hole which will leave millions worse off.

At least two dozen have signed a letter to the Treasury highlighting their fears to the Chancellor – urging him that an extra £2billion is needed for the reform.

Around a million people are expected to go onto Universal Credit next year as part of the rollout to everyone over the next five years.

The letter reads: “As it stands 3.2million working families are expected to be worse off, with an average loss of £48 a week.

“Enabling hard working parents to keep more of what they earn and thus encouraging them to take up more work is at the heart of Conservative policy.

This Comic Nails the Difference Between Chronic Fatigue and Just Being ‘Tired’ . . .

‘The Mighty’ is a digital health community, created to empower and connect people facing health challenges and disabilities, and I came across it by accident – but found so much relevant to my own life, that I signed on for regular emails.

The comic strip, further below this, is one such link sent to me to read, and it reflected my life so much, that I really wanted to comment on it here.

The comic strip shows exactly what happens to me every time I try to be ‘normal’, and meet up with a friend for lunch, or try to be a little independent, and attempt to do small chores for myself, etc. It shows the difference in energy used between a healthy person, and someone suffering with an auto-immune illness, and I felt it showed the difference very well.

It really is so very hard to explain to someone who isn’t suffering from a plethora of auto-immune illnesses, just what life is like for us who do 😦 Link to website: The Mighty.com – Comic Strip that explains Chronic Fatigue Syndrome/ME

In honor of myalgic encephalomyelitis (ME)/chronic fatigue syndrome awareness day on May 12, I thought I’d make a comic. When I decided to do this I didn’t quite realize just how long it would take and how many spoons, but hopefully it’s worth it.

To read a transcript, head here.

Introducing Maddie, a girl with ME, who in this episode, “Energy and Exertion,” is meeting her friend, “Normal” Nancy, for coffee.

This blog was originally published on Laura’s Pen

Just like Maddie in the comic, I suffer with ME, but I also have Fibromyalgia, Lupus, Arthritis, and a plethora of other health problems – plus 2 blood disorders that are really making my already complex health issues even worse. This means, unfortunately, that the physical, and mental, side effects of each of them, affect me even more than just the one problem does Maddie 😦

Like Maddie, I try my best to occasionally meet up with a friend for lunch, or to go into town – even if it’s only to get money out – although I’m unable to travel by Bus, as it became a very painful – and totally exhausting – thing to do years ago.

I can only manage this, though, if a good friend picks me up in her car, and drives me around from place to place – so I can manage to do what I must, without having to constantly walk too far. Then, when I’ve either finished my list, or just run out of energy, she then drives me home again, making sure I get myself, and anything I’ve bought, safely into the house.

If I absolutely MUST go into town for something important, and my friends are unavailable, then I’ll catch a taxi, which I arrange to return for me where I was dropped off, an hour later (because an hour is my absolute limit, especially when on my own)!

If I have to use a taxi, once I get there, I know I will only be able to manage one or two things that I absolutely HAVE to do – plus, I also have to plan the shortest route possible between places I need to visit before my energy runs out, and I need to get back home before I fall down exhausted – so I only do what I absolutely MUST do 😦

I often need to get cash out from my post office which, fortunately, is in the same building as the food shop, where I often need to go to get the items I’ve forgotten to order with my home delivery! (oh, for a brain that didn’t keep forgetting things!). I can normally do this before needing to get home but, if I happen to meet a friend while I’m in town, then I often have to choose between the shopping, or stopping to chat with the friend, as it’s almost always impossible for me to do both – especially if I want to save enough energy to get back home safely, where I can then collapse back into bed, where I’ll spend most of the next few days desperately trying to recover enough to look after myself properly 😦

My life is no different to many thousands of others, here in the UK – and around the world – whose lives are affected so badly by chronic illness, and we all, in one way or another, find it difficult to get across to others who are fit and healthy – or who are physically disabled in a way that doesn’t affect their energy values – the way in which our lives are affected by these awful autoimmune-based illnesses that we have to cope with every single day of our lives.

But I think that the worst aspect of all of this, is the thought that there are no cures for any of the auto-immune problems that so many of us suffer with, especially as they have made it impossible for me to work! This means that I have to rely on Welfare to keep me fed, and homed – in almost every aspect of my life – by a government who are doing everything they can to make life for people like myself a living nightmare 😦

To make matters worse, I lost my wonderful husband in March, and I had to spend the next 3 months going through all the worst aspects of this, while trying to apply for the benefits I needed to live on – it took 12 weeks before they sorted out what I was entitled to and, if it wasn’t for good and kind friends, I don’t know how I would have managed, financially, or emotionally! 😦

It certainly didn’t make my health any easier to cope with when, along with the grief suffered with then – and now – I also had to fill in so many forms, and battle with the DWP to get what I needed to live on – but that’s another story, I guess 😦

Judge Death: Esther McVey’s Department for Work and Pensions will evaluate the PIP entitlement of people who have died since claiming – including some whose claims were refused altogether. Fat lot of good it’ll do them [Image: PA].

Perhaps Esther McVey thought disabled people would be grateful when she announced that every claim for Personal Independence Payment would be reviewed, because the government was under-paying people with mental health problems. If so, SHE THOUGHT WRONG.

In fact, the 1.6 million PIP recipients whose claims are to be reviewed have greeted the announcement, not with gratitude, but with terror.

While [the] opportunity to gain extra data on the appalling Human Rights situation is welcomed, the simple fact we are all being put through a desk-based review before our existing review date just fills us all with dread.

To read the full article, posted today by Mike Silvier, of VOX POLITICAL, please click on the link below:

Once again, Kitty Jones hits the nail on the head with this post:

via Conservative MPs accuse citizens of ‘scaremongering stories’ about experiences of Universal Credit.

I really don’t understand how so very many ordinary working – and non-working – people are being hoodwinked into voting for a party that are idealogically driven, and are all for the Elitist Rich?

This is a party who are driving poverty levels in the UK into the ground – to levels not seen since Victorian times!

The constant eroding of our Human Rights is barely being spoken of.

Our Economy is rapidly sliding down the drain, along with any of the Industries that had made the UK a leader in the past, and which are, once again, desperately needed, if we’re to build our country’s economic future on a firmer footing than the tory Tax Haven ideals.

The gap between the Very Rich, and the (so-called) undeserving Poor, has never been so wide.

Yet, where are the outcries about the gradual attrition of our hard-won Democracy – fought for by our grandparents, and their parents and grandparents before them – and bought on the backs of loss and pain?

All we need now, is for the terrors of the Work House to be brought back once again – something our forebears fought long and hard to abolish in the first place – and then we’ll see the completion of our lives being deliberately regressed back in time – where the Rich Elite have every bit of power, and the poor work for a pittance – and still starve!

Considering the thousands upon thousands of unnecessary deaths, due to the Tory-led DWP’s ideological attritions, which have created an ever-increasing result of Homelessness, which then leads on to Starvation, Chronic Ill Health, Disability, and then death, to so very many citizens of the UK – and all of this taking place under a very silent Mainstream Media (unless they are screaming that their Tory paymasters are being lied about, of course)!

These are things that were first introduced by the Tory-Lite Blairites, thus heralding the decomposition of an effective Opposition Party, and making it even harder for this new Jeremy Corbyn-led Labour Party, to fight against this pernicious, and machiavellian,  disease of tory greed and corruption!

The fact that, since the tories took power, and insisted on introducing their ‘made to fail’ Universal Credit,  it shows that we really have already reached the pits of despondency and despair!

So much for ‘scaremongering’ 😦