I’m a total numpty where the internet is concerned, but even I knew how to delete FB and Twitter posts! Lol

So, the Tories have announced – in what appears to be a rather desperate attempt to convince people that they know something, anything about computers after the debacle of yesterday’s NHS ransomware catastrophe driven by chronic Tory underfunding – that, if re-elected, they will make a law to allow young people to remove social media posts they made before they were 18.

Which only goes to show even more clearly that they don’t know the first thing about how either social media or the internet work. They clearly haven’t any understanding of both the transience and permanence of the internet – or the fact that it’s not a UK thing. 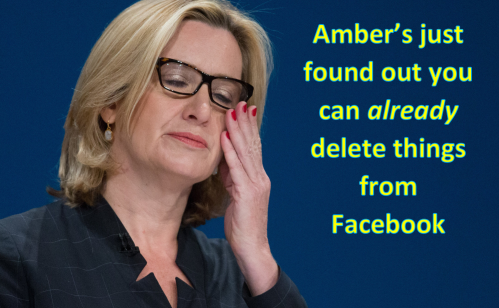 You can already do it

Any user of Facebook, Twitter or other social media can already remove anything they’ve posted. It’s easy.

Here’s an extract from the Facebook help page on how to delete something you’ve posted:

And Twitter’s instructions are similarly…

One response to “#TheresasTories don’t know how FB, Twitter or Internet work”