The Tories mocked the Labour Party Manifesto, and said that there’s no ‘Magic Money Tree’ to finance it – and yet they’ve ‘found’ 1 Billion Pounds as a bribe to the DUP, so they can stay in power!
Where has that money come from?
Why wasn’t it given to the NHS to keep hospitals open, or to the Police, the Fire Brigade, Social Services, Schools, the Ill/ Disabled, or all the other places and people who have been starved of cash – all for the Tory’s Neoliberal Austerity ideals?
It’s about time we got some answers – ones that aren’t a pack of lies 😦

The Democratic Unionist Party (DUP) will receive £1 billion in additional public funds and participation in government policy-making in return for its ‘confidence and supply’ arrangement with the Tories. 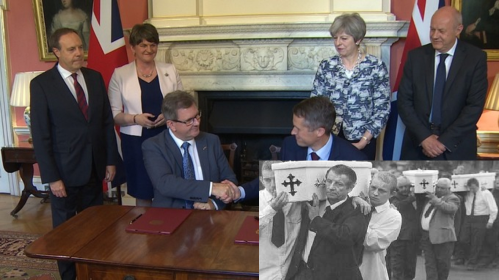 Tories and the DUP reaching their deal. Inset: the funeral of the Quinn boys, murdered in a loyalist firebomb attack

After more false starts and delays than a bad day on the notorious Southern Rail that have meant the deal has been announced weeks later than originally promised, there’s little doubt that the public deal represents only a small part of the concessions the Tories will have made in order to bring the famously…