I truly hope that one of the Powers That Be will start to wake up, and do something about this!
The fact that we are living with an unconstitutional parliament should surely wake them up, and start acting in a more Democratic way?
But pardon me!
I fell asleep for a minute there, and thought we did actually live in a democracy!
Silly me!

Last weekend’s Sunday Times ran a front-page story describing Buckingham Palace sources’ ‘exasperation’ that Theresa May ‘misled’ the Queen by claiming that she had done a deal with the DUP, when in fact it took her another seventeen days to do so: 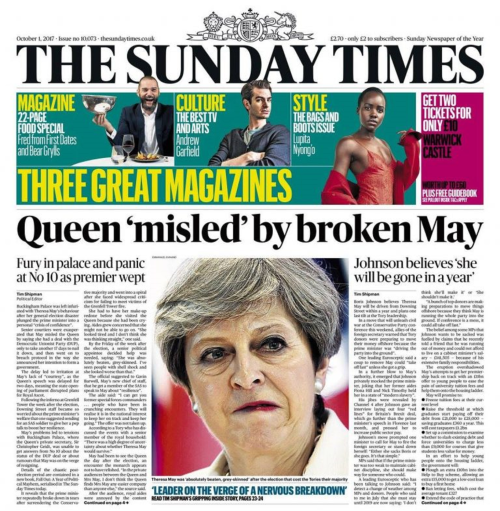 The key parts – blurred but legible – show that this ‘misleading’ was not the only unprecedented aspect of the post-General Election events. May also delayed the Queen’s Speech to gain time for her negotiations, the first time this had ever happened:

May also angered the Queen by telling…