Government refuse to publish Brexit impact assessment. We need to ask why

Kitty S. Jones has really shown clearly how the present government are willing to do anything at all to keep the power it has stolen from our democratic country.
Through their continued lies, and obfuscation of the real truths of Brexit, they are heading this country to a real disaster of epic proportions – but they won’t be the ones to suffer through this, as they are rich and powerful, and so will be kept safe from the results – no, it will be the ordinary man and woman of the UK, the taxpayers, who will bear the brunt of it all! 😦 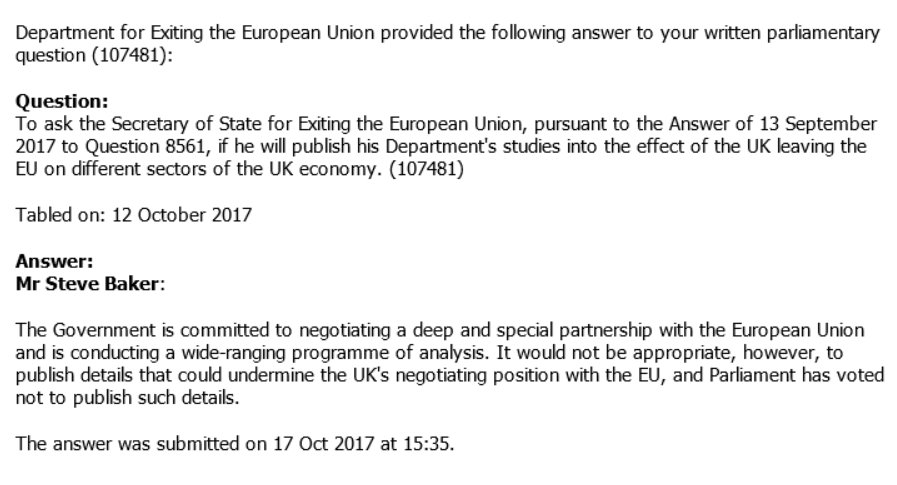 “Despite calls from over 150 MP’s and threats of legal action, the Department for Exiting The European Union are still refusing to publish Brexit impact assessments.” David Lammy.

Whitehall’s internal risk assessments of the impact of leaving the EU on various sectors of the UK economy have remained the private property of the government. The government’s reluctance to publish them has been one of the most controversial, and widely discussed, features of its approach to Brexit. Ministers say that publication would undermine their hand in the Brexit talks and could influence thedebate on Brexit if they were revealed. Circulation of the assessment is said to be highly restricted inside government because of its political sensitivity.

However the government’s authoritarian refusal to publish these documents is undemocratic, and it means the public remains in the dark about Whitehall’s internal analysis over the economic impact of Brexit. Not a government that’s fond of public scrutiny, transparency and accountability, then.